The viola da gamba (viol) is a bowed stringed instrument, closely related to the guitar family. It was not the forerunner of the violin family, and is not historically related to it. The viol has six strings, frets, a flat back, with a fold bringing the back closer to the neckline. Instead of F holes, it has C holes. There is no spike. The word “gamba” means “leg”, and all sizes of viols are held with the legs. There are also some viols with a 7th string. This innovation came about in the late 17th century in France, and the 7th string is needed to play some French and German solo music.

The main sizes of viols are treble, tenor and bass. In addition, the pardessus de viole was used (mainly by ladies) in 18th century France, while the double-bass equivalent, the violone, comes in two tunings: G and D. Viols are tuned in fourths with a third in the middle, very like the guitar. From the top string, the treble is tuned d’, a, e, middle C, G, D. The bass is tuned the same, an octave lower. The 7th string is a low A, a third below the bottom string of a cello. The tenor viol is a G tuning, the top string a fifth above middle C. g, d, A, F, C, G’ The pardessus de viole can have five or six strings, and there is more than one tuning, but the top string is always a high g’, an octave and a fifth above middle C. The top three strings will be g’, d’, a and after that, it depends on the model and number of strings on the instrument. The violone is tuned either as a tenor viol, an octave lower, or as a bass viol and octave lower. All of the viols have seven frets, which are tied in gut. We often use old strings for this as they are already stretched. The purpose of the frets is to promote resonance. While it does help to find the notes, the frets are not fixed in place, and loose frets need to be retied with the special fret knot. The frets are spaced by semitones. 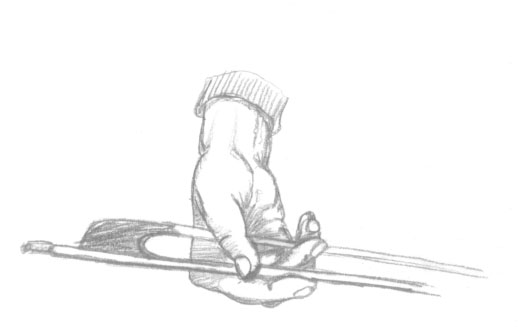 The viol bow is held underhand, with the thumb over the top, the index finger around the stick, and the middle finger on or slightly through the hair. The part of the hair where the hand goes is not rosined. Strings are made from beef or sheep gut. Usually the bottom two strings are silver wound onto gut. This reduces their thickness, allowing for easier playing. Renaissance viols will use plain gut for all six strings. Repertoire for viols is diverse and covers music from the early 16th century to the 21st century, though there was something of a lull between about 1750 and the early 20th century when Arnold Dolmetsch rediscovered the viol among a number of early instruments.

Viols often play in consort like recorders. There is a wealth of wonderful music written for 3, 4, 5 and 6 part consorts, as well as a few pieces for larger groups. Viols can also play in broken consorts with other instruments. There is a huge repertoire of solo music (accompanied and unaccompanied) for bass viol, as well as some for treble and pardessus de viole. The tenor viol does not have much in the way of solo repertoire except for arrangements. However, all sizes of viol can play from tablature (a different form of notation using locations rather than pitches). There is repertoire for one, two and three viols playing from tablature. In addition, there is the continuo role for bass viol, and bass can also play with a singer and a lute in the lutesong repertoire. Viols play with voices in madrigals, canzonets and cries. And bass viols play obbligato parts in cantatas and passions by Bach and Handel and occasionally in orchestral pieces such as Bach’s 6th Brandenburg Concerto.
— Patrice Connelly 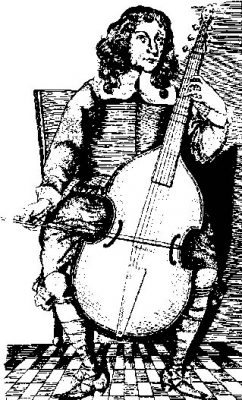