The recorder, or flauto dolce, Flute a bec, fipple flute, common flute, or Blockflöte which are just a few of the names ascribed to it, is a member of the flute family, though differs from the transverse flute in that the air is directed onto a labium or lip by way of a windway, whereupon the air stream is divided both over the lip of the recorder and also through the instrument. The more fingers down, the lower the note, unless the thumb hole is opened slightly and a tone an octave higher generally results. Much less air is required to make a recorder speak, especially in the lower notes, than other wind instruments, though this varies over the range of the instrument, which is generally just over 2 octaves.

The instrument name “recorder” derives from the Latin recordārī (to call to mind, remember, recollect), pre-1350s Middle French recorder (to learn by heart, repeat, relate, recite, play music) and its derivative recordeur, one who retells, thereby closely associating its name with medieval jongleurs and their capacity to memorise and retell music. The recorder is first documented in medieval Europe, though no extent instruments remain from this time period, and was most popular during the Renaissance and Baroque periods. Its popularity waned during the Classical and Romantic periods due to the rapid rise of orchestral wind instruments such as the flute, oboe and clarinet. It did however become popular again in the latter half of the twentieth century as composers discovered twentieth century techniques that could be employed. 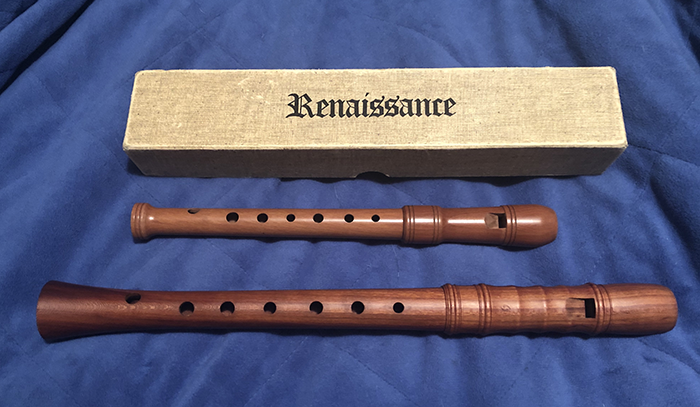 The build of the recorder has changed over time, from just one piece of reverse conical bore which was quite wide, resulting in a lovely low register but reduced upper register, to double holes for the right ring and little fingers and a decorative bell, to being in three pieces and a much narrower bore in Baroque instruments which sacrificed a little of the rich lower tones, but produced more upper overtones and a wider range, giving the recorder its sweet sound and enabling it to carry over an ensemble better. Due to its narrow pitch range, recorders were made in many sizes, from the garklein down to the sub-contrabass recorder and beyond(?). Though recorders are generally in either the keys of F or C (and recorder music for F recorders is not transposed so recorder players need to learn different fingerings for F recorders so they do play in concert pitch), there are recorders pitched in G (voice flute ), D (sixth flute) and Bb (fourth flute), the latter being written for by such English composers as Babell and Baston.

So, in order, and key of the most common recorders

Also, as the recorders got larger, in order to overcome the stretch required for the fingers, keys were added, especially for left ring finger and right little finger from bass down, though there are a range of recorders from the maker Paetzold that look radically different to what we would think a recorder looks like and are actually based on the design of an organ flue.

Recorders are made from many different materials, from plastic, ivory and glass through to woods such as boxwood, pearwood, rosewood, ebony, grenadilla, olivewood and maple. Generally speaking, the harder the wood, the more strident the sound, the softer the wood, the more diffuse the sound and less able to carry over an ensemble.

In modern recorders, keys can also be added to tenor recorders, Denner makes an excellent ‘comfort tenor’. Also, given the recorder experienced its own ‘Renaissance’ in the latter half of the twentieth century, B and E keys were added to the descant and alto recorders respectively which greatly increased their upper range and there are recorders available that can be plugged into electronics and composers apply a wide range of twentieth century recorder techniques including glissandi, various articulations including flutter-tonguing, and multi-phonics.

The different recorders have their own vocal characteristics, the garklein and sopranino being used for birdsong such as The Bird Fancyer’s Delight, the descant and alto being used in concertos and the lower recorders popular in consort playing. The alto was by far the most popular, featuring in many concertos, including Bach’s Fourth Brandenburg Concerto with two alto recorders, cantatas and chamber music such as with violin, oboe and flute. Modern composers such as James Eccles and Eileen Silcocks write for recorder orchestras ranging from sopranino to contrabass and there are many fine arrangements for recorder duos, trios and larger ensembles available from www.imslp.org and https://www.dolmetsch.com/sheetmusic.htm.

Recommended reading material for all things recorder is The Recorder Player’s Handbook by Hans-Martin Linde, published by Schott ED 12322, translated from the German by Richard Deveson 1991. There are many fine online resources for the recorder, most recommended is the YouTube channel Team Recorder by Sarah Jeffery which caters for young and old, very beginners to advanced and can be found at https://www.youtube.com/user/SarahBlokfluit or her website www.sarahjeffery.com. Another excellent website is www.recorderhomepage.net 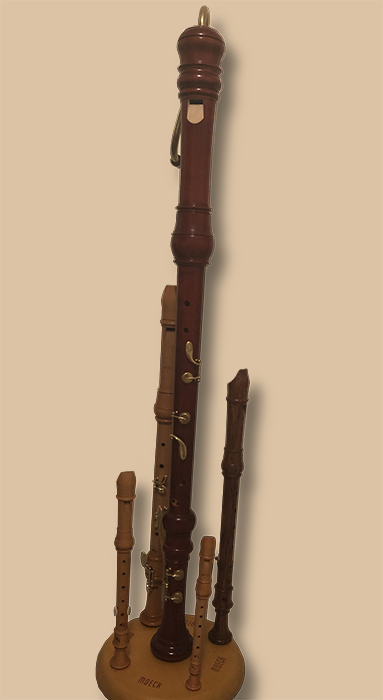