Most musicians who play Baroque flute have previously played a modern-day flute. They encounter pieces in their study written by composers such as Bach, Telemann and Handel and find that historically, the flute these composers were writing for was really quite different from a modern flute and they become curious about how the music would have sounded to the composers when they were writing their works. Then they find that there is this thing called “historically informed performance”. In order to play the music with the appropriate style of playing they find themselves reading the treatises written at that time by folks like Hotteterre (who wrote the first reference book on how to play the flute), Quantz, Tromlitz, Corrette and others. Some of these treatises have not yet been translated into English so there could be a PhD project for someone. 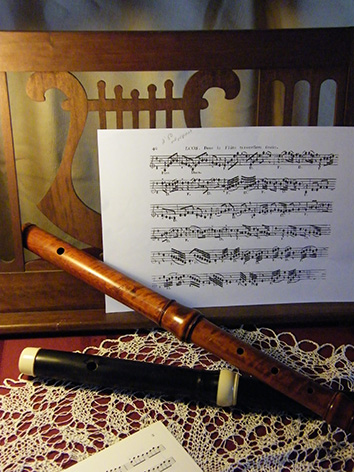 Prior to about 1600, the flute (called a renaissance flute) was a flute in one piece with a roughly cylindrical bore. The Hotteterre family, having learned from the bagpipe makers how to make a tenon and socket joint, started to produce a wooden flute in 4 pieces with a conical bore (which improved the tuning of the instrument) and a single D# key made of silver (see photo). The construction of the flute was very successful and the instrument become a standard for approximately 150 years of music history. In fact some folk flutes used today are still of this same construction.

Its character is very different from a modern flute. On a modern-day flute, players strive to produce an even tone throughout the chromatic range. Baroque flute is an instrument all about the distinct colours and the character of individual keys. It is a quiet instrument which has been described as “pathetic” and very suitable to express certain emotional characteristics of the music written at the time. There is a very famous letter written by the composer Berlioz who heard a performance of Gluck’s Opera, Orfeo and Euridice. In this letter he praises the flute player in the orchestra for his rendition of the “Spirit Dance” from the opera. Although by this time in history many flutes had various keys, it is thought the performance he heard was almost certainly played on a one keyed instrument. Many flute players are familiar with this piece, usually published as the “Minuet and Spirit Dance”. In fact, in the opera it does not appear this way with the Minuet (that was the publisher’s idea), and some publishers have also altered some of the rhythms in the piece. It is informative to look at the original to see what Gluck really wrote, and that is a good example of what the study of “historically informed performance” reveals.

In the 1700s, pitch was all over the place in Europe and generally lower than the standard modern flute pitched at A=440 Htz (or vibrations per second). To make things a bit easier, makers of copies of baroque flutes have adopted two standards: A=415 and A=392. It is possible to buy a baroque flute pitched at A=440 however the baroque flute was not designed to play in equal temperament. Normally one would learn to play in tune with Vallotti temperament for a start. I would be a bit wary of buying a second hand wooden baroque flute as the instrument needs to be “played in”. If you buy a new one the maker will explain how to do this. If buying second hand, unless you have the opportunity to play it first, you may find you end up with an out-of-tune instrument if the first owner did not properly play the instrument in. 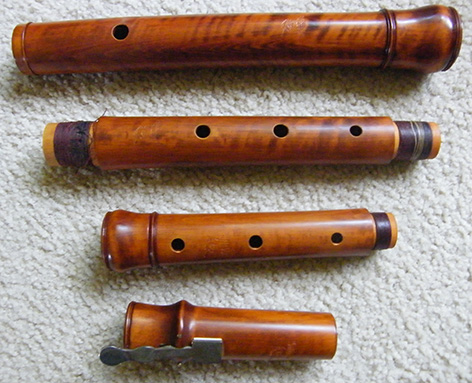 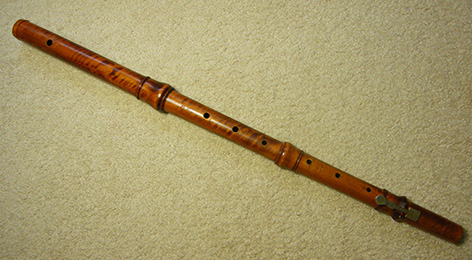 When I first became interested in baroque flute I tried a plastic Aulos baroque flute. This is the cheapest way to try the instrument, and these plastic flutes have their place, however it’s like plastic recorders and wooden recorders. If you want the real thing it needs be a wooden instrument as it was in its time. Consequently I was put off for a while. Now with the internet giving us access to a great deal of material about the instrument, musical resources, and access to makers of instruments (mostly overseas), there is a whole world of possibility there to explore.

Baroque flute is not actually taught professionally much here in Brisbane / Queensland, and if there is anyone reading this who feels they are qualified to teach the instrument then we’d love to hear from you. Most of the handful of baroque flute players in Brisbane would best be described as enthusiasts. To seriously study the instrument one would need to go to Sydney, or better still overseas, to find a good teacher.

But you can get started here, by exploring the available resources, purchasing a suitable instrument and reading the treatises and exploring the facsimile copies of the original music available on the internet. Here are some links to get you started:

An introduction from Lisa Beznosiuk from the Orchestra of the Age of Enlightenment:
https://www.youtube.com/watch?v=n6Ts2z9tXg8

Kate Clarke gives a demonstration of how to make a beautiful sound with a baroque flute which can be seen at https://www.youtube.com/watch?v=JXJzZ-SOErc

Look for recordings by some of the older established player such as Bartold Kuijken, Marc Hantaï, Wilbert Hazelzet, Jed Wentz, Phillippe Allain-Dupré, and that list is by no means comprehensive. There is a lovely rendition of the Hotteterre’s “Pourquoi du Rossignol” to listen to at
https://www.youtube.com/watch?v=Vvv4hZI7fSA with a young Croatian flautist. This piece would hopefully be within the range of a beginner player after they have their intonation sorted and a few ornaments under their fingers.

While it is very tempting to pick up a baroque flute and as soon as possible rip through every baroque piece you have ever learned on the modern flute, it is not advisable. Best to start with some of the Brunettes (love songs) by Rippert or some pieces requiring less mastery of technique like the Stanley Solos or some sonatas by Platti.

Some useful publications to begin with are listed below:

Hotteterre, Jaques-Martin Principles of the Flute, Recorder and Oboe (Translated by Paul Marshall Douglas) and published by Dover

Quantz, Johann Joachim Capricen and Solfeggio both published by Amadeus. The Solfeggio is thought to have been the teaching notes used by Quantz when teaching Frederick the Great.

The most valuable internet resource I have found for facsimiles of music written in the early 1700s, is https://imslp.org/  Search scores by time period or instrumentation and you will likely find more music than you will be able to play.

A word of warning. If you get serious about looking at facsimiles of baroque flute music you may need to become familiar with the French violin clef. Some pieces are written in the standard treble clef but some appear in the French violin clef which you can read just like a bass clef but transposing up 2 octaves. Have fun!

There are many kinds of keyed flutes which appeared historically from around 1750 onwards and some players become specialist historic instrumentalists, playing flutes from around 1400 through to the present day. But that’s the stuff of another entry by someone other than me!

If you have any questions please send them in through the EMSQ contact page and they will be directed to the relevant member.