A Personal Commentary on the Cornetto 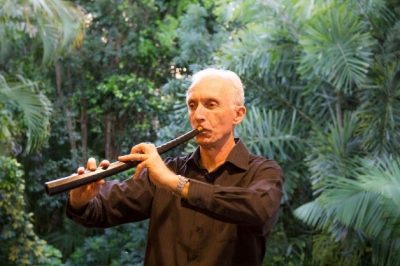 Having heard the sweet and captivating sound of the cornetto on recordings in the 90s , when the offer of buying a cornetto for a modest price came up I jumped at it, but it very soon became a curiosity that I carried around in my instrument bag rather than something I played. Even with a solid background in brass instruments, I found it frightfully hard to play more than a few rude notes on.

The mouthpiece was so tiny, it seemed to require chops of steel and a Schwarzenegger six pack to squeeze even half a scale out of it  – but a good few years later after hearing it played so beautifully and expressively by Jean Tubery from Il Giardino Armonico, I resolved that I must learn to play it and enjoy the great Baroque repertoire that the cornetto is so well suited to. So I sought out the only cornetto teacher in  Brisbane, Greg Rogers, and asked him to train me in the art of playing it.

At this point you may be asking what is a cornetto, other than that familiar icecream that we all drool over. As its Italian name suggests, it is a ‘little horn’ and indeed the most widely used and best sounding cornetto, the treble cornetto is curved, like an animal horn, and measures a little over 60 cm in length.  It tuned in G. This is what people mean when they use the term ‘cornetto’ or, as the English prefer, ‘cornett’.  It sounds a softer version of the modern cornet.

There are other members of the cornetto family of instruments.   There is a straight variant of cornetto called a mute cornetto, which has a funnel shaped mouthpiece built into the body of the instrument giving it a lovely mellow tone somewhere between an oboe d’amore and the flute. So yes, it is able to speak!

There is a smaller soprano version, called the cornettino, a larger tenor version, called the Lysarden, and there may have once been an even larger bass cornetto, but its existence is debated. However none of these three versions sound nearly as sweet and refined as the treble version cornetto and so are rarely seen or heard.

The treble cornetto evolved through the 15th and 16th centuries, reaching its peak of popularity in the late 16th century, when it rivalled the violin for solo lines and virtuosity. Bruce Dickey, one of the world’s finest cornetto players and teachers reports ‘At the height of its popularity, the cornetto was the king of instruments, played by highly-paid virtuosi whose performances left chroniclers breathless with praise.’  Then with the decimation of the plague in 1630 and declining playing standards, it sunk into obscurity in southern Europe by 1640 and by the end of the 17th century in northern Europe. What a shame!

With the retrospectoscope, the curved treble cornetto looks like a curious cross between a trumpet and a recorder with a tiny acorn shaped cupped mouthpiece, to produce the harmonics and  six finger holes and a thumb hole to produce all the chromatic notes over two and a half octaves. The tuning and volume of the chromatics varies so it requires considerable concentration and skill to even these out and to achieve the sweet and bright tone which makes good cornetto playing a joy to behold.  In this Youtube clip of Merula’s ciaccona, Jean Tubery illustrates how sweet and virtuosic the cornetto can be:

As a side note, notice how Jean Tubery makes a flourish of wrapping the mouthpiece in dental floss to create a seal. It is fashionable amongst cornetto players make sure they have 15 centimetres or so of floss hanging down from the mouthpiece. To me this is akin to the fashion of teenage boys ensuring the elastic of their underpants pokes above their trouserline!

In the early Baroque period Mersenne compared the cornetto’s tone to a ray of light penetrating the darkness. There was a strong aspiration to emulate the human voice and the cornetto was regarded as coming as close as anything in this regard. Here is fine example,featuring Bruce Dickey, of how a voice and a cornetto can work beautifully together:

These two players along with others like Doron Sherwin (https://www.youtube.com/watch?v=lrdtBK2rawU), show what is possible with the cornetto and have been the source of much enjoyment and inspiration for me as I continue to work on my cornetto playing. Even after 18 years I love the challenge of playing my cornetto sweetly and in tune. This requires eternal vigilance to maintain good technique and tone, as unlike with modern brass instruments, the simple design of the instrument offer no free rides to the player. It requires a good warmup and attention to detail to reap the rewards of this beautiful, mystical instrument.